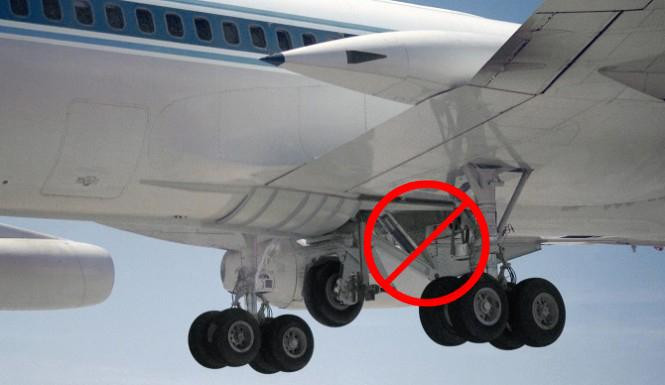 In what will come across as a really shocking development, a body of an unidentified man was found in the landing gear compartment of a plane that had arrived in Amsterdam’s Schiphol Airport from Lagos, Nigeria on Monday, April 19.

Dutch authorities have launched an investigation into the man’s identity and cause of death after he was discovered inside a wheel arch.

“We are investigating the discovery of a body in the landing gear of an airplane that arrived from Lagos (Nigeria),” , Royal Military Police tweeted on Tuesday, adding that the Schiphol airport police unit and forensic investigators were working on establishing the person’s identity and cause of death. 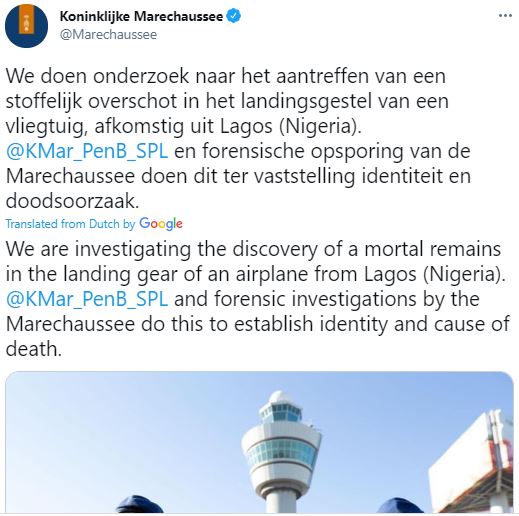 According to the Dutch media, the body was discovered by the airport technical staff in the KLM airlines plane. The victim was reportedly a stowaway and was killed by the low temperatures during the flight.

A spokesperson for the Royal Netherlands Marechaussee told Dutch newspaper Algemeen Dagblad: “The man had holed up in the wheel arch of the plane. The low temperatures have presumably been fatal to him during the flight.”

In a similar case, a boy, 16, from Kenya hid in the landing gear of a plane flying to Maastricht Aachen airport from London, in February this year.

He survived but has been hospitalised with severe hypothermia. It is thought he later applied for asylum status.

Ellen DeGeneres To End Her Daytime Talk Show After 19 years

How Bandits, Kidnappers Disguise As Commercial Motorcyclists To Terrorise Abuja

Boko Haram Scare: Individuals And Vehicles To Be Thoroughly Screened At National Assembly

US Citizens Buy Fuel In Plastic Bags, Kegs As Fuel Scarcity Hits Some US States (Video)

View all posts by admin →

According to SaharaReporters, the operatives of the National Drug Law Enforcement Agency...

Ellen DeGeneres To End Her Daytime Talk Show After 19 years

How Bandits, Kidnappers Disguise As Commercial Motorcyclists To Terrorise Abuja